Click on ‘question’ takes you directly to the answer

What Microbicidal effectiveness has been proven for the Antigermix AS1 & Hypernova Chronos? 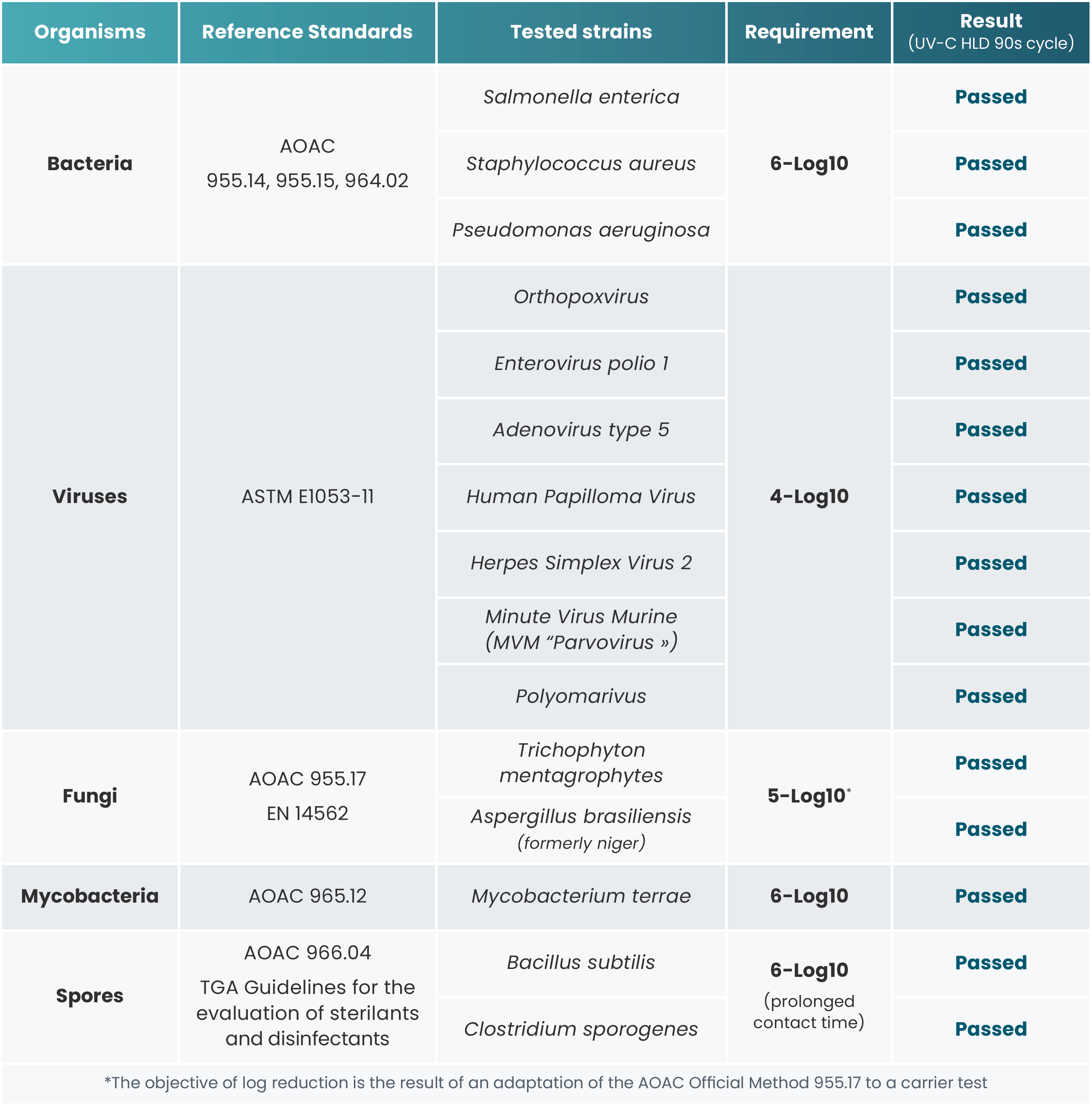 How is UV HLD efficacy positioned compared to other classical HLD products?

Independent tests have been carried out to compare Chronos to other classical HLD chemical soaking products intended for ultrasound probes, and show that UV HLD is much more efficient than most of them 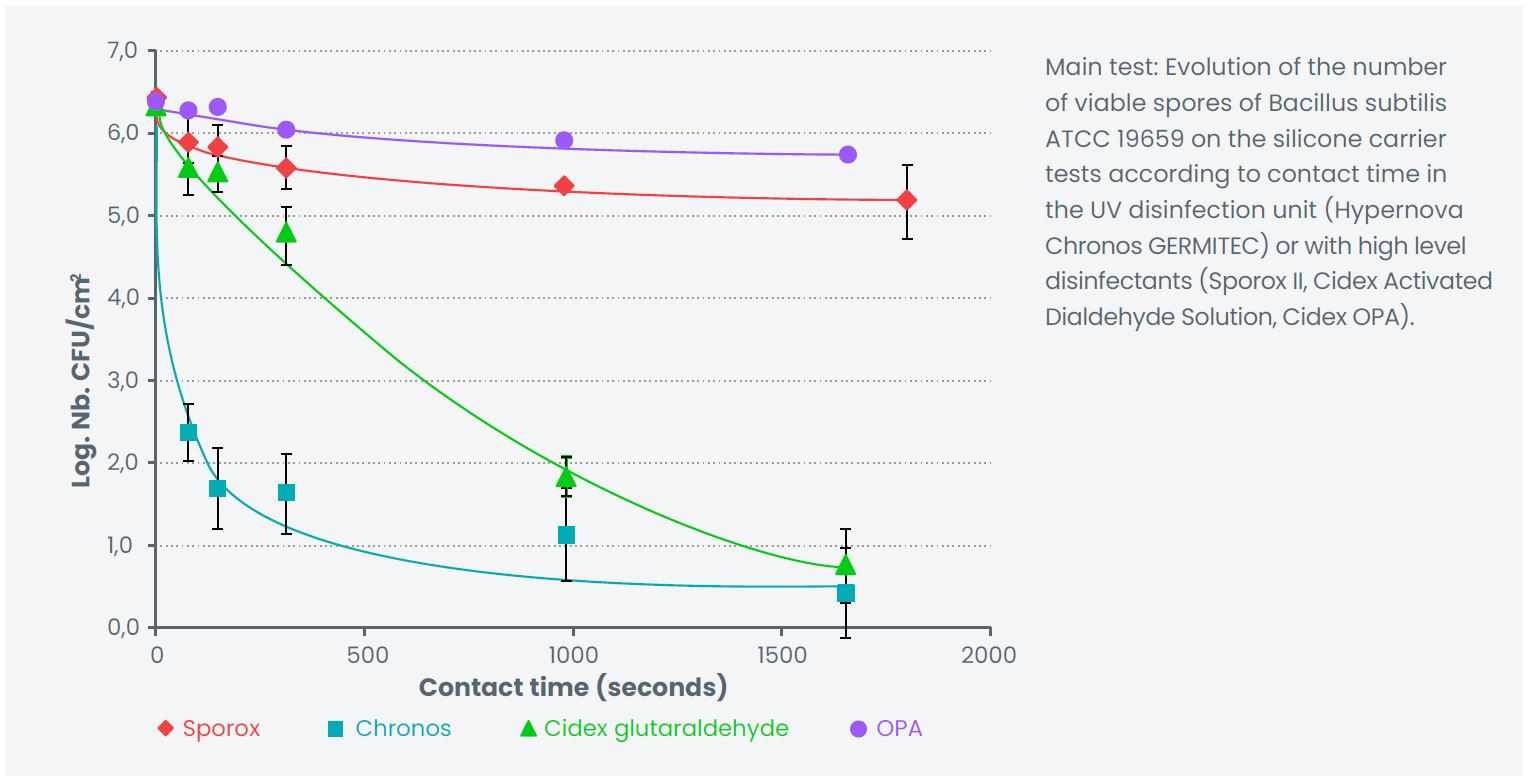 Has UV-C HLD been proven to work on Reusable Medical Devices (RMDs) in a clinical setting?

There are several clinical research papers that demonstrate UV-C HLD effective on Reusable Medical Devices (RMDs) in a clinical setting. The latest clinical papers are:

This study was performed with current version of Antigermix AS1 with a 90 seconds cycle. 15 ultrasound probes used in anaesthesia for block placement were exposed to a large inoculum of 3 bacteria : Staphylococcus aureus, Escherichia coli, and Enterococcus faecalis. All probes were infected after inoculation (>150 colony-forming units) but were considered sterile (<10 colonyforming units) after disinfection. Moreover, for the authors, this method could obviate the use of sterile probe covers, which can improve echogenicity.

This is the first In-Use Study of Human Papillomavirus (HPV) Conducted in a Clinical Environment. The aim of this study was to determine if ultraviolet light – C spectrum (UV-C) disinfection is more efficient than low level disinfection (LLD) in routine clinical conditions, especially against HPV.
The study compares two protocols usually found in infection prevention practice when using endocavity ultrasound probes:

The study had three phases. Results showed the following outcomes:
1ST PHASE: No probes (0/100) were found positive for HPV or human cellular DNA after UV-C HLD (with AS1).
2ND PHASE: All 47 probe covers were intact (no visible damage) and positive for human and HPV DNA.

What are the Occupational Health and Safety benefits of using UV-C HLD?

UV HLD uses no chemicals therefore there is no need to manage staff exposure and risks associated with processing chemicals is eliminated.

There are no risks associated with high temperatures, and chemical burns on users face or hands. Since UV-C HLD has now chemical residue or toxins from vaporised microorganisms there is no need for rinsing or wipe the probe after the disinfection cycle. This also reduces the risk of cross contamination and the need for special ventilation requirements such as fume cabinets and air quality monitoring to remove chemical fumes or remove airborne toxins produced from chemical deactivated microorganisms.

The Antigermix and Hypernova ranges of products are a safe solution for both staff and patients.

How does the UV HLD mitigate environmental impact?

The UV HLD is the safest environmental choice of HLD available for the following reasons:

This no waste and no chemical approach is central to Germitec’s ecological and environmental protection philosophy. The system itself is also fully recyclable. Germitec and distributors provide a guarantee to take back the system at the end of its useful life for recycling.

What UVC dose is needed in order to adequately High Level Disinfect?

The disinfection is achieved when the probe has received a sufficient germicidal UV-C dose. The dose required was determined by:

Shading factor related to the presence of the probe in the Antigermix enclosure. Using a dose threshold guarantees that an adequate disinfection level has been achieved.

How is the UVC dose measured?

What quality Monitor is in place for the Optical Diodes?

The 2 optical diodes are each calibrated using a medical calibration device. (See calibration of Photodiodes paper for detailed information)

The Maximum deviation from the medical calibration device and the photodiode is a stringent Coefficient standard deviation.

How often is calibration of the photodiodes recommended?

What training and accreditation is offered for the Antigermix?

Applications training for staff on the use of the Antigermix products or Hypernova Chronos is conducted during the installation. On-line training is available Germitec training plus a comprehensive e-training presentation with a Competency Assessment checklist.

How does the Antigermix compare to other methods of HLD?

Germitec’s Antigermix (AS1) product scored a recommendation level of R2

R2 Basic research and development has been completed and the product may have potential value; the RRP recommends in use evaluations/trials to demonstrate improved efficiency or efficacy in improving infection and control to reduce healthcare associated infections are considered within an active NHS clinical setting. 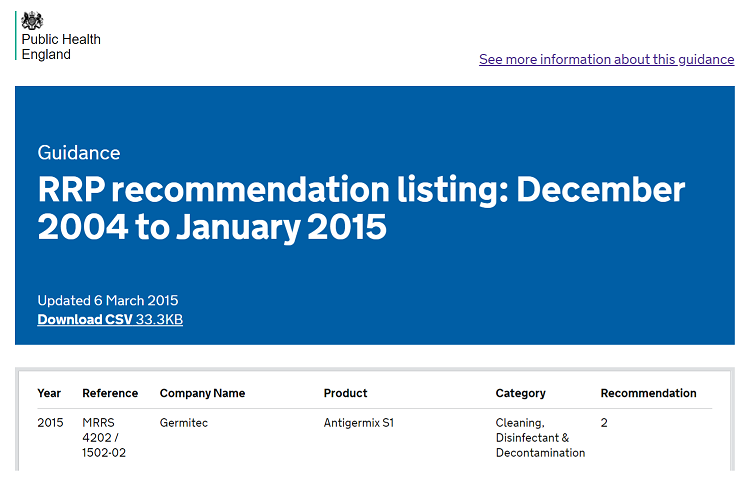 A comprehensive literature review of all published journal articles on the available methods of High Level Disinfection was conducted by the NHS Scotland and Health Protection Scotland.

This paper compared available evidence for the use of ultraviolet light systems, hydrogen peroxide devices and manual wipes for the decontamination of Semi-Critical probes. This covered specifically; semi-invasive probes (SIUPs) and non-invasive ultrasound probes in semi-critical procedures.

The following grades were given to the available evidence within the literature review using SIGN methodology.

What ultrasound probes are compatible with the Hypernova Chronos?

The utilisation of plastics has gained popularity in medical device assembly because of their strength, weight, cost savings, aesthetics and performance properties. Medical Grade Polymers are commonly used to manufacture and assemble surgical instruments, catheters, endoscopes, ultrasound probes and other medical devices. These medical-grade polymers are designed specifically for use in medical applications that enable the medical devices to be capable of withstanding repeated cycles of ethylene oxide (EtO), radiation (UV-C), chemical sterilants and autoclaving.1

In some probes, UV-C can cause slight discolouration of the housing and the cable. However, slight discolouration does not affect the performance of the ultrasound probe and these changes can be minimised by proper cleaning prior to each UV-C cycle. Cleaning of the device is a necessary part of the decontamination process. In comparison, chemical disinfectants are also known to cause discolouration to the surface of ultrasound probes. For example, Cidex OPA IFU states signs of surface discolouration can occur after 7 days or more.2 Butterfly iQ states in its ‘Compatible Cleaning and Disinfection’ approved product list that hydrogen peroxide system can result in premature cosmetic wear of the device.3

Has the Hypernova Chronos been tested against high risk Human Papillomavirus and who performed the efficacy test?

The Hypernova Chronos high level disinfection system has been rigorously tested to kill high-risk cancer strains 16 and 18 of Human Papillomavirus (HR-HPV). The HR HPV cancer strain is known to cause 90% of cervical cancer and greater than 60% of other anogenital cancers and is responsible for a significant portion of oropharyngeal cancers.g.1

Dr. Meyers is a distinguished Professor of Microbiology and Immunology, Obstetrics and Gynecology, and the Director of the Training Program in Viruses and Cancer. His team was the first to grow native (natural, infectious) HR-HPV in high enough quantities for laboratory testing. Dr Meyers has been working on producing HR-HPV high titer, mature viruses, for over 35 years. He knows how the virus needs to be mature and structurally stable. He has published several research papers on disinfectants commonly used on ultrasound probes. These studies also indicate the clinical importance of using native HR-HPV for disinfectant and microbicide testing in contrast to surrogate viruses and virus like particles (quasi virions and pseudo virions).

In the Hypernova Chronos efficacy study Dr Meyers used the hard surface carrier test method based on the ASTM E1053-11 standard test method suitable for assessing virucidal activity on non-porous surfaces. The study methodology is in line with Federal Drug Administration
(FDA) guidelines for assessing virucidal efficacy of high-level disinfectants. To claim that your high level disinfection system is effective in killing HR-HPV, it needs to demonstrate that it can achieve a 4-log (99.99%) reduction.

The Hypernova Chronos achieved a greater than 4-log (99.99%) reduction for both the HR-HPV16 and HR HPV18, therefore demonstrating that it is effective in killing the HR HPV. In contrast, OPA showed minimal efficacy.1-2

In conclusion, UVC radiation is an effective disinfectant method used to inactivate human papillomaviruses (HPV16 and HPV18). The Hypernova Chronos which has been proven to kill HR-HPV, provides an extra level of safety for patients and medical staff.

Chronos
Designed For The Best

This website uses cookies to improve your experience while you navigate through the website. Out of these cookies, the cookies that are categorized as necessary are stored on your browser as they are essential for the working of basic functionalities of the website. We also use third-party cookies that help us analyze and understand how you use this website. These cookies will be stored in your browser only with your consent. You also have the option to opt-out of these cookies. But opting out of some of these cookies may have an effect on your browsing experience.
Necessary Always Enabled
Necessary cookies are absolutely essential for the website to function properly. This category only includes cookies that ensures basic functionalities and security features of the website. These cookies do not store any personal information.
Non-necessary
Any cookies that may not be particularly necessary for the website to function and is used specifically to collect user personal data via analytics, ads, other embedded contents are termed as non-necessary cookies. It is mandatory to procure user consent prior to running these cookies on your website.
SAVE & ACCEPT
Scroll to Top